I cast on for my new sweater (Bailey cardigan - Ravelry link) last night. I have a self-imposed deadline for this one - I want to be able to wear it by the time cold weather arrives. Here in the Deep South, that's the end of November. :)

I'm sure it'll be finished before then - this yarn is such a delight to knit. I'm loving the fabric... the silk content added to the polwarth wool gives it a wonderful drape, and a subtle shine. 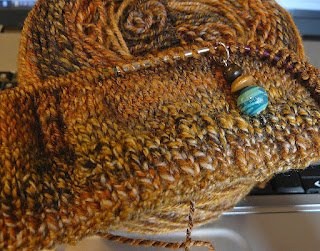 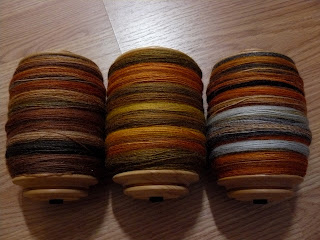 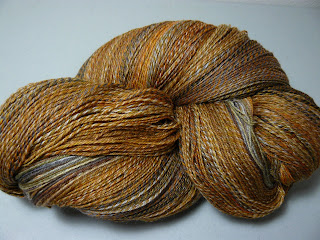 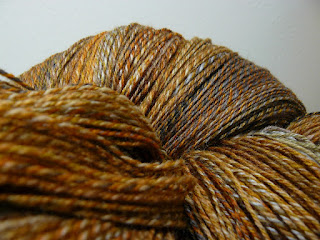 I can't wait to get this yarn washed and dried so I can cast on!
Posted by DebbieB at 12:37 PM 4 comments:

WOW - the rainbow dishtowels are all sold and gone. I was amazed at how quickly they were snapped up. I'll be weaving another set of them (slightly different, of course, but still rainbows) - they were such fun to weave.

Speaking of rainbows - here are a few more. I just finished a big pile of custom-handspun yarn, and I snapped a pic before boxing them up for their trip to Ohio. 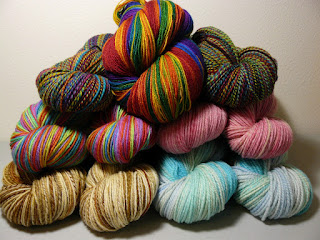 Remember these rainbow dishtowels? I finished them, hemmed them, and washed/dried them, and then neglected to take pictures. I'm such a slacker photographer. :) 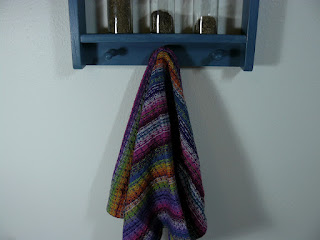 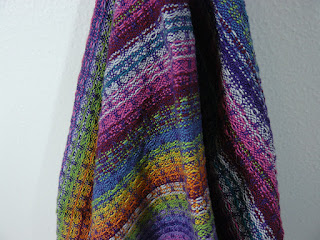 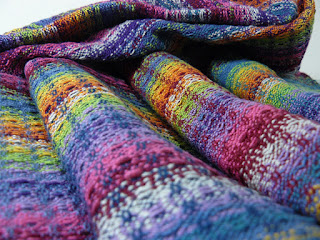 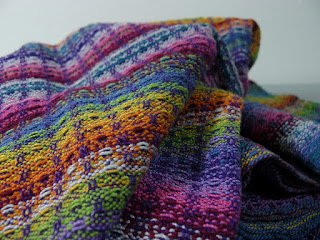 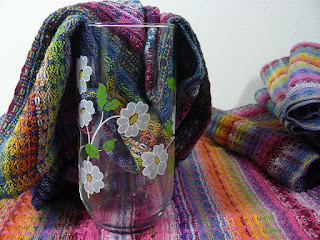 They were great fun to weave, and they're so pretty. Each one is unique - I used a different weft for each towel (drawn from the warp colors) so they're fraternal rather than identical. I've listed them for sale - 3 have already sold, but I still have a few colors left.

I want to do another run of these, mixing the colors up a bit and perhaps using a different weave structure - so many possibilities!

Hurricane Isaac battered us, but left us with no damage or floodwater in the house, for which we are truly grateful. We had sustained winds of 70 mph for several hours, and the storm hammered us for 2 days - it just.wouldn't.leave. We feared that the 15-20" of rain we received would overwhelm the pumping system and the waters would rise into the house, but we were glad to see them recede just in time. So many others were not so lucky.

Our power went out at 7pm Tuesday night, and wasn't restored until 8pm Friday night. All the contents of our refrigerator/freezer and our upright freezer perished. We don't own a generator - all we could do was open the windows (after the strong winds passed and died down to a "mere" 40-50 mph) and try to sleep in the heat and humidity (no such luck). We heard the "thunk" of small limbs and seed pods from the magnolia trees hitting the roof sporadically, and each time I worried that one would crash through a window, or take off shingles, but they all bounced off harmlessly.

Usually (if there is any "usually" with a force of nature) hurricanes move through fairly quickly, traveling at a good speed - so while they wreak havoc and leave damage in their wake, they LEAVE. This storm moved at a ridiculously slow pace of 6-8 mph - a runner with a good pair of shoes could have outrun it. Because it stuck around, it dumped much more rain, and delivered many more hours of strong winds than expected. Local levees (as opposed to the federal levee system, which is newly strengthened and held very well) overtopped and failed, flooding lower coastal parishes with storm surge. Swelling rivers rose over their banks and overwhelmed dams, sending rapidly rising water onto property and into homes.

Our area is safely inside the federal levees, so we weren't in danger of flash-flooding. The storm was forecast to "only" strengthen to a Category 1 - meaning sustained winds of 74-95 mph. We've historically "sheltered-in-place" for such storms, only leaving for the ones forecast to hit us at Category 2 or above. When we leave, we go to my sister's house in Hammond, which is northwest of here, about an hour's drive under normal circumstances. She lives in the country, on high ground, so there's no danger of flooding, and she has a generator to supply enough electricity to run the refrigerator, fans, and a small window air conditioning unit. That's where we sheltered for Hurricane Katrina (coincidentally EXACTLY 7 years before this storm, to the date).

We opted to stay home this time, and regretted it. We didn't feel that we were in danger of life and limb, and hoped to mitigate any possible flooding damage by being in place with mops and buckets. It's such an inconvenience to evacuate - packing up everything we'll need for ourselves and the cats (and evacuating them is an issue in itself - they are terrified during the journey and frightened in their "prison" at my sister's house). But we underestimated the stress levels we'd all experience from the hours and hours of howling winds with a storm that refused to leave, and the misery of the heat and humidity for such a sustained period of time.  Sleep was only possible for minutes at a time. The power company was unable to work on restoration of service until the winds died down below 30 mph, and did I mention that the storm just.wouldn't.leave??? As I write this, much of our area is still without power, and they only expect to have 70% restored by Monday 9/3.

I couldn't spin or knit or weave - the heat and dampness made touching wool or yarn uncomfortable. I did read 3 books on my iPhone Kindle app - I didn't need a flashlight because it's backlit, and the phone was easy to keep charged via the big battery I have for the miniSpinner (since I couldn't use it for spinning).

SO. Lesson learned. From now on, we're leaving for any tropical/hurricane storm that heads our way... and as soon as we can get all our 'ducks in a row' (job sorted, house sold) we'll be leaving permanently for my beloved mountains.
Posted by DebbieB at 9:13 AM 3 comments: